As every child knows, the very best gardens are filled with mystery.  There are shadowy nooks, towering trees, pools of water, and strange and beautiful flowers. In this world of enchantment, that flash of color hovering just above the flowers might not be a butterfly or hummingbird. It just might be the elusive garden fairy. Belief in mythical creatures isn’t simply child’s play. Stories of fairies and flowers have been interwoven for centuries. They’re part of a rich tradition of legends that surround the plants of the garden.

Myth and Magic in the Garden 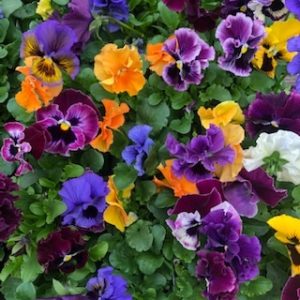 For hundreds of years, plants were thought to have the power to summon good spirits and to ward off evil. Flowers such as foxgloves, roses, pansies, irises, tulips and phlox were believed to attract fairies to the garden. On the other hand, Saint John’s wort, daisies and red verbena were believed to protect against fairy spells and evil spirits. It was thought that fairies could be summoned with blue bells. It was also believed that invisible fairies would become visible to mortals bearing four-leaf clovers. Primroses were thought to hold the key to fairyland. Following cowslips was the way to find the fairies hidden gold.

Trees, too, have long had mythological connections. In fact, many ancient cultures worshipped trees and believed that spirits lived within them. Maple, dogwood, cypress and cedar are but a few of the trees with ancient religious ties.

Legend has it that the hyacinth was named after a young man who was killed while playing sports with Apollo. The flower said to have sprung from the land where he died was a hyacinth. Another legend tells that the smoke of a juniper burned during childbirth would protect the newborn from being taken by the fairies. Furthermore, juniper smoke was said to protect against leprosy and plague. Ancient alchemists believed that the dew found in lady’s mantle leaves would enable them to find the fabled “philosopher’s stone”. This stone was capable of turning metal into gold. Wouldn’t we all love to find that? And some myths persist in modern time. For example, garlic is still used as a protection against evil, as are English holly and angelica.

In Herball, published in England in 1597, John Gerard recorded many fascinating plant histories and legends. He recounted that “the first or most antient Rose did spring out of the bloud of Venus”.  Also, snapdragons when “hanged about one preserveth a a man from being bewitched.”

Today’s gardeners are better educated, more technically proficient and more  knowledgeable in horticulture than the average gardener of the past. But even modern gardeners might occasionally spare a thought for the beliefs of their ancestors and keep a sharp eye out for things that flutter magically, almost invisibly through the flowers.